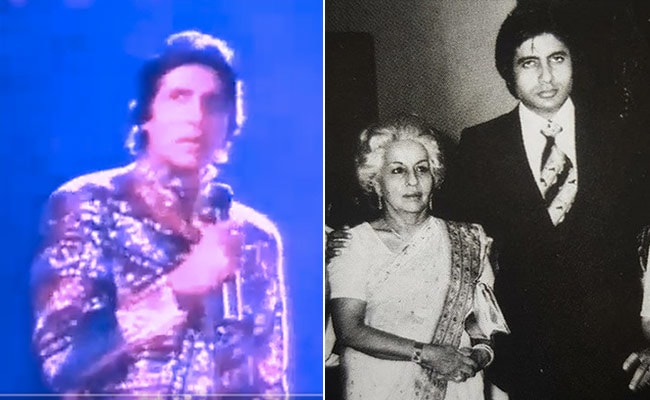 Bollywood megastar Amitabh Bachchan has given more than one great films in his career. The dialogues of many of his old films have been evergreen. One of those films has also been Deewar. Deewaar is one of the blockbuster films of Amitabh Bachchan’s career. This film of Big B was released in theaters on January 24, 1975. Today it has been 48 years since the release of the film Deewar. In such a situation, a video of his years old is becoming fiercely viral on social media.

This video of Big B is from a concert in which his mother Teji Bachchan was also present. In this concert, Amitabh Bachchan dedicated the famous dialogue of the film Deewar to Maa Teji. In the video, he says to his mother, ‘This is from a scene which is a favorite of mine and my mother too. My mother is sitting somewhere in the audience today and I dedicate this piece to her. Then in the concert, Amitabh Bachchan tells the audience about his victory in the film Deewar. He says that in the film his mother is ill and he goes to the temple to pray for her.

Then the evergreen song of Big B Deewaar film, ‘Aaj Khush to Bahut Honge Tum’. Speak dialogues. This video of Amitabh Bachchan’s concert is becoming increasingly viral on social media. The fans of the veteran actor are very fond of the video. Also commenting and praising Amitabh Bachchan. Let us tell you that the film Deewar was the biggest hit film of the year 1975. This film won the Filmfare Award in the year 1976.