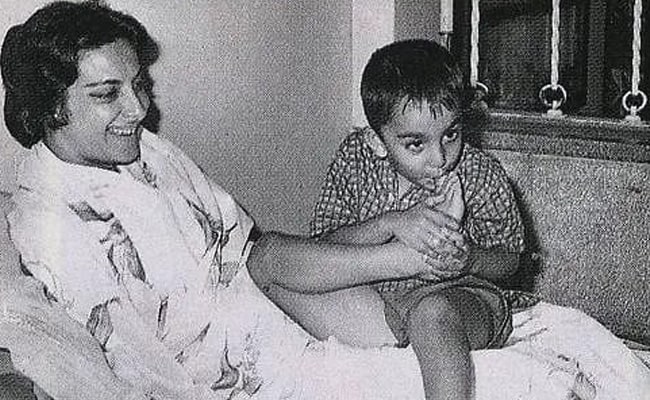 The life of some Bollywood stars is no less than a film itself. The life of some stars who grew up in love since childhood changed completely in the future. Today we are talking about one such Bollywood star who was very close to his mother. His mother was also a superhit actress of the past and his father was also a big actor, who after acting also learned the tricks of politics and proved to be a successful politician. Can you recognize the little boy in the picture now? In Bollywood, he is known as ‘Baba’ and lovingly people call him Sanju. Yes, this cute little kid seen in the picture is none other than Nargis and Sunil Dutt’s son superstar Sanjay Dutt.

The life story of Sanjay Dutt is no less than a film story. At first mother’s lap was the world for mother Nargis’s beloved Sanju, but he was completely shattered when mother left him and said goodbye to this world. In the picture, Sanjay is sucking his toe while sitting on his mother’s lap. Sanjay is looking very innocent and cute in the picture.

After the death of his mother, Sanjay Dutt made himself a drug addict, due to which his father Sunil Dutt had to struggle a lot to get rid of him. In this picture, 15-16 years old Sanjay is seen with father Sunil Dutt and mother Nargis Dutt. Mother is probably saying something in Sanjay’s ears and is giving him some lesson.

Sanjay himself is the father of three children today. Their first daughter Trishala Dutt was born in 1988, Trishala is the daughter of Sanjay’s first wife Richa Sharma. Sanjay has two children from Manyata Dutt, daughter Iqra and son Shahraan.

Sanjay often shares pictures with his children and wife Manyata, fans also like his family photos.