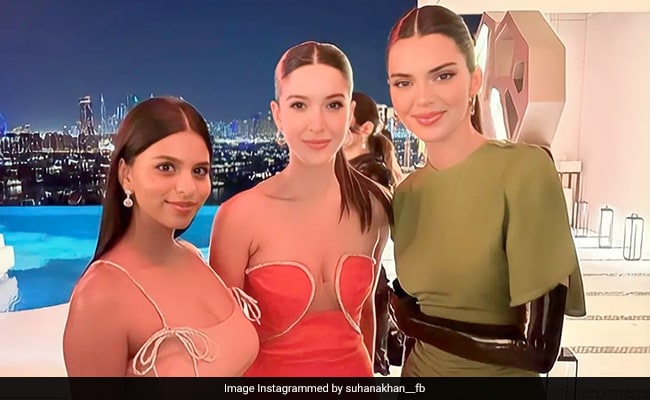 Before the release of Pathan, some pictures of Shah Rukh Khan’s darling daughter Suhana Khan have surfaced on social media. In these pictures, Suhana is seen partying with Kendall Jenner in Dubai. During this, Shanaya Kapoor can also be seen. Actually, Suhana Khan herself has shared some of her photos with Kendall on her Instagram. In these pictures, she is looking glamorous in a light pink dress, while Shanaya is looking super gorgeous in a red dress.

On the other hand, talk about Kendall, she is wearing an olive green color dress and as always she is looking amazing in this dress. Kendall paired her dress with latex gloves, which were making her look stylish. Suhana Khan had posted these pictures on her Insta story, which was later shared by her fan page as well. While sharing these, Suhana posted an emoji by writing ‘Fun’. Talking about Suhana’s work front, she will soon be seen in Zoya Akhtar’s ‘The Archies’. He has recently completed its shooting.

Apart from Suhana, many other star kids will also be seen in The Archies. Amitabh Bachchan’s grandson Agastya Nanda and Sridevi’s daughter Khushi Kapoor will also make their debut with this film. On the other hand, Shanaya is also ready to start her career with Karan Johar’s Bedhadak. In this film, she will be seen playing the role of Nimrit. In this film, Lakshya and Gurfateh Peerzada will be seen in the lead roles along with Shanaya.