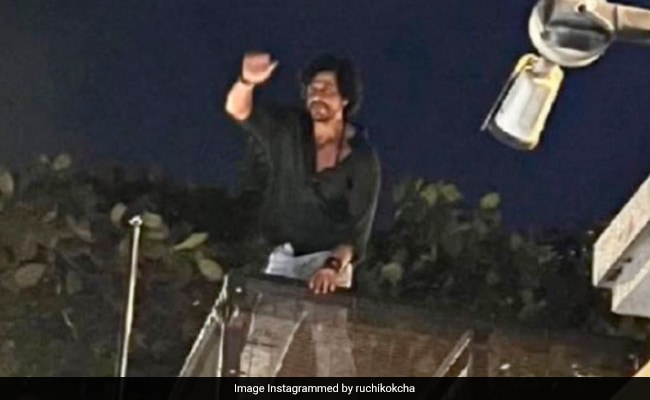 The discussion of Bollywood’s King Khan’s Pathan is in full swing these days. While the count down for the film’s release has started, Shah Rukh is not leaving a single chance to interact with the fans. Whether it is an Ask SRK session or stepping out of the house to welcome fans, Shah Rukh is everywhere. Meanwhile, a video of Shah Rukh Khan is going viral, in which he is seen welcoming fans outside his house Mannat.

Actor Shah Rukh Khan has shared a video on social media, in which he is seen surprising his fans by coming out of his Mumbai home Mannat on Sunday. Actually, in the video, Shahrukh is seen standing on Mannat’s balcony and greeting his fans with folded hands. In this video, thousands of people are seen gathering outside the house. At the same time, he is also seen doing his iconic pose for the fans.

Thank you for a lovely Sunday evening… sorry but I hope ki laal gaadi waalon ne apni kursi ki peti baandh li thhi.
Book your tickets to #pathan and I will see you there next…https://t.co/KMALwZrdw5https://t.co/GHjZukrkRq pic.twitter.com/D2M6GsfCzK

Sharing a lovely caption with this video, Shahrukh Khan wrote, “Thanks for a lovely Sunday evening… Sorry but I hope the red car riders had their seat belts on.” Book your tickets for #Pathan and I will see you there… As soon as fans saw this video, while sharing the photo of this surprise of Shahrukh in the comments, they wrote, Masha’Allah do do chaand ek saath dikh rahe hai. Another user wrote, the time has come to break Pathan’s record.

Let me tell you, the discussion of Shah Rukh Khan’s Adans booking is in full swing. Actually, even before the release, the film has booked record breaking tickets.