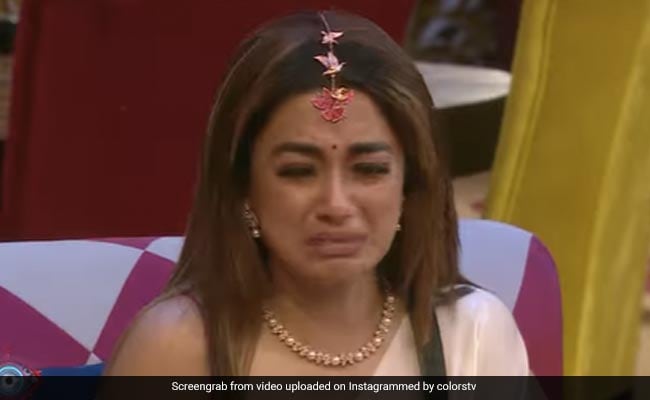 In the reality show Bigg Boss 16, a lot of controversy is being seen between Shalin Bhanot and Tina Dutta. This show is running on its last phase. In such a situation, the quarrel between the two has increased a lot. Not only this, Tina and Shalin are also making many surprising revelations about each other. Now on Weekend Ka Vaar, when Salman Khan asked Tina many questions, she started crying bitterly. Not only this, Tina Dutta started crying saying that she is very tired. They have to go home.

In fact, recently Tina told Priyanka in Bigg Boss 16 that Shalin Bhanot had approached her outside before appearing on the show and said that she would play as a team in Bigg Boss house. Salman Khan questioned Tina Dutta about this in the Weekend Ka Vaar episode. After which she started crying bitterly. Colors TV channel has released a video promo related to Bigg Boss 16 on its official Instagram account.

In the video, Salman Khan tells Tina, ‘Tina according to you Shalin’s game plan was. So when it has been 15 weeks now, you are remembering that it was already planned. After hearing this of Salman Khan, Tina Dutta starts crying bitterly. She says, ‘Sir, I have to go home. For the last three weeks, allegations are being made against me in one way or the other. I can’t stand it anymore. I want to go home.’ Whereas Priyanka is making Tina silent.

Let us tell you that in a video recently uploaded on Twitter, Tina is telling Priyanka Chahar Chowdhary, “Pata hai, funny part hai, yeh mujhe chup kar raha hai kyun kar raha hai? When he came to know that I am coming on this show, he called our common friends and said, ‘Set up meeting with Tina. I really want to meet him.

Priyanka Chaudhary, who is looking in shock after hearing this, replies, “Oh God, he has come out of spring after planning.” On this Tina Dutta says, “That is why he makes me silent. Sent me a message that we will be a team, we will play together, we will not nominate each other. And that guy says that he doesn’t know anything about this game. He cannot deny this because a third person is also involved in this.

Tina Dutta also revealed, “Woh Shaleen Bhanot bahar Gautam Vig se bhi mil me aaya hai aur usher PR ka number diya.” She also tells that this is the reason why Shalin and Gautam were behaving like best friends in the beginning. Tina adds, “Shalin Bhanot was desperate to meet me. I didn’t know anyone except Sreejita. He was planning from outside.” In the last episode, Tina Dutta threatened to slap Shalin Bhanot after their fight.