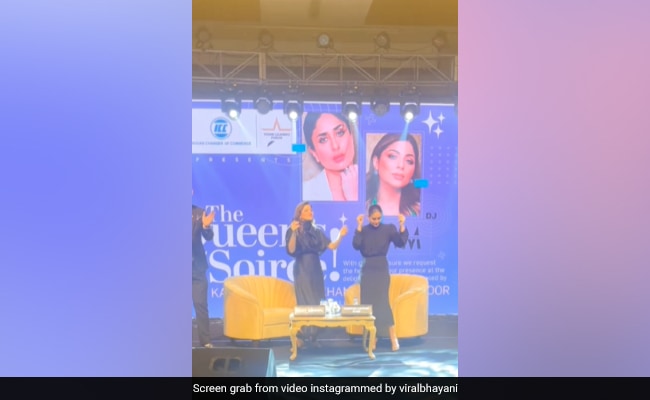 Bollywood actress Kareena Kapoor and singer Kanika Kapoor were recently seen bonding at an event. In fact, both the stars attended the program of the Indian Chamber of Commerce-Young Leaders Forum in Kolkata on Sunday, in which she was seen dancing. A video of the event is going viral, in which Kareena is seen dancing to Kanika’s song. Fans are sharing their reaction after watching the video. Not only this, he is also seen praising the singer.

In the viral video, Kanika Kapoor is seen singing the song Da Da Das of Udta Punjab on stage. Actually, apart from Kareena, Shahid Kapoor, Alia Bhatt and Diljit Dosanjh were seen acting in this film. While talking about Kareena Kapoor’s look, she was looking very beautiful in a black backless dress. The actress had tied her hair in a bun. On the other hand, Kanika was also seen in a black dress with front split. While the singer sang Da Da Daase, Kareena was seen dancing to the song.

Fans have shared their reaction on this video shared by a paparazzi. One user wrote, Bebo seems to be setting an example. Another user wrote, in fact it is an iconic song. Listen to it every time you feel like giving up and you won’t give up again. The third user wrote, Natural and simplicity beauty.”

Let me tell you, Kareena Kapoor, who reached the event, has also shared her opinion about the ‘Boycott Bollywood’ trend. While talking about the workfront, Kareena was last seen sharing the screen with Aamir Khan in Lal Singh Chadha. At the same time, this film of the actress also had to face the ‘Boycott Bollywood Trend’, due to which the film was very much discussed.