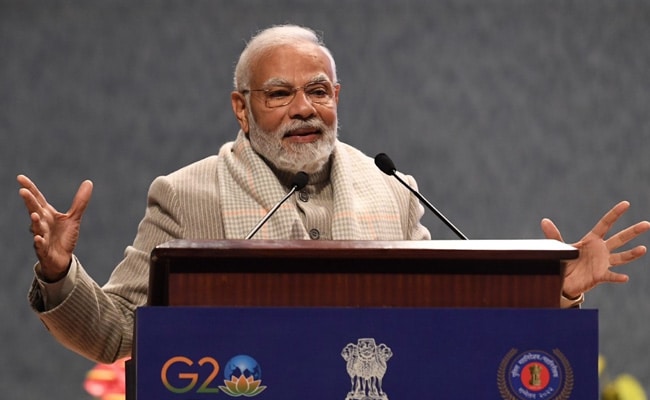 Addressing the 57th All India Conference of Directors General/Inspectors General of Police, the Prime Minister suggested repeal of obsolete criminal laws, creation of standards for police organizations in states.

According to an official statement, “The prime minister also stressed on enhancing cooperation between state police and central agencies to leverage capabilities and share best practices.” Also discussed strengthening of coastal security.

The Prime Minister suggested making the police force more sensitive and training them in emerging technologies and underlined the importance of a ‘National Data Governance Framework’ to streamline data exchange across agencies.

He suggested that while the police force should take more advantage of technological solutions like biometrics etc., there is also a need to further strengthen traditional policing mechanisms like foot patrolling. Modi also supported prison reforms to improve prison management.

PM Modi called for replicating the model of DGP/IGP conferences at state and district levels to discuss emerging challenges and evolve best practices among his team. The conference covered various aspects of policing and national security, including counter-terrorism, counter-insurgency and cyber security.

The three-day meeting was attended by Union Home Minister Amit Shah and National Security Advisor Ajit Doval, among others. Around 600 more officers of various levels from States and Union Territories participated in the conference in hybrid mode.

A statement from the Prime Minister’s Office had earlier said, “Since 2014, Modi has taken keen interest in the DGP’s conference. Unlike the token presence of earlier prime ministers, he attends all key sessions of the conference.

The statement also said that the Prime Minister not only listens patiently to all information, but also encourages free and informal discussion so that new ideas can emerge.

The statement said it provides a conducive environment for the country’s top police officers to directly brief the Prime Minister on key policing and internal security issues and make open and clear recommendations.

An official said that inspired by the Prime Minister’s vision, the conference began to discuss the future of policing and security. The three-day meeting discussed topics such as security challenges along the land borders with Nepal and Myanmar, strategy to identify foreigners living in India for long periods and targeting Maoist strongholds.

Modi also distributed police medals for distinguished services. The annual meeting was held in New Delhi till 2013. The next year, when the Modi-led government came to power, it was decided to organize Home Ministry and Intelligence Bureau events outside the national capital.

This time the conference was organized at the Indian Agricultural Research Institute, Pusa, Delhi. Earlier, Vigyan Bhavan used to be the venue of the meeting in the national capital.