These days foreign people are seen making reels on Indian songs on social media. Meanwhile, Norwegian dance crew, ‘The Quick Style’ has once again won the hearts of fans with one of their dance videos. In fact, Viral Dance Group recently performed on the superhit Indian song Jehda Nasha at the Dubai Shopping Festival. Its video is going viral on social media, which has been seen by millions of people till now. At the same time, people are seen praising the dance of this group.

Norwegian dance crew, ‘The Quick Style’ shared a sneak peek of their dance on Instagram. In the video, the group members can be seen grooving to the hit Hindi song ‘Jehda Nasha’ and the audience’s reaction. With this video he wrote, “Grateful to perform together!” Along with this, he has also shared two hashtags #mydsf and #mydubai in the caption of the video. The boys also did the popular twerking step of ‘Kala Chashma’ at the end of the video and then later bowed down to thank the audience.

People commented fiercely on this video. One user wrote, we have to see more videos of the concert. Another wrote, please share the video of the complete performance. The third user wrote, Habibi come to India. The fourth user wrote, Black suit suits you. Many such users have shared fire and heart emoji. 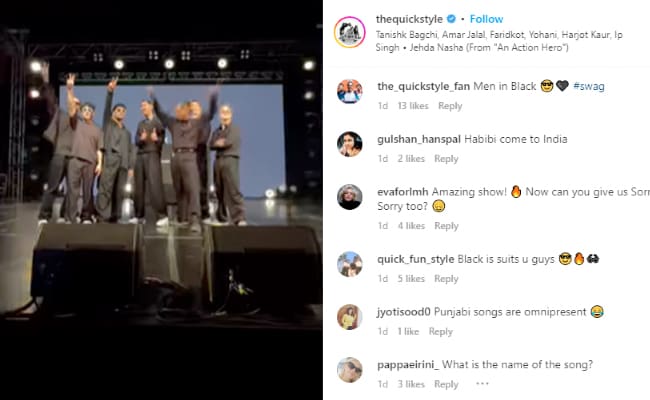 Let me tell you, the Norwegian dance crew, ‘The Quick Style’ was last seen dancing to ‘Kala Chashma’ from the film ‘Baar Baar Dekho’ at a wedding last year, which was liked by the people. At the same time, that video had made this group an internet sensation on social media overnight.